Encore Electric craftsmen working on the 410,000 square foot 16th and Chestnut office tower in Downtown Denver know that the project is nearing completion. Encore electricians are working on core and shell as well as the tenant improvement in the 19-story office tower. 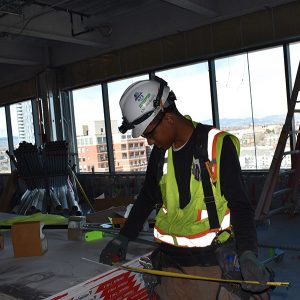 For Encore, meeting that challenge means prefabrication was critical for the speed and sustainability requirements of the building. Starting out with a crew of just 10 Encore employees initially, the team grew to an eventual 80 craftsmen at its peak supporting the work of Saunders, the project’s general contractor. In particular, prefabrication built the gear skid entirely offsite in the prefabrication center. After unloading it from the truck and putting it in place, only 15 minutes had passed. Full installation lasted 1.5 hours, but saved the team at least a week on the schedule.

“In a downtown setting, it is always tough to coordinate, but this went well,” said Ryan Krueger, who helped with the layout and preplanning for the gear skid. “In addition to the extra time on site, there would be so much more waste on site with boxes and plastic. Prefabrication is a huge help, and I would definitely do it on other projects.” 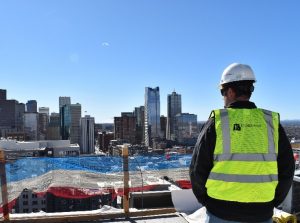 “I’ve always been in construction,” said Patrick Johnson, project engineer. “I love the pace of construction-I was born to build stuff.” About the gear skid, he said, “This project is extremely fast-paced. Without prefab, we wouldn’t be where we are with the schedule.”

Rob Mercier, manager of the Encore prefabrication center worked together with the team at 16th and Chestnut to bring prefabrication to the forefront of the conversation. “We’ve been doing this for the oilfield and (we’re) changing the mindset of construction about prefabrication in the electrical field,” said Mercier. “Plus, we’re streamlining the process. It comes to the field completely bolted together to be sure no water or dust can enter the system making it clean and efficient.”

On higher levels of the building, Encore Electric craftsmen were busy completing other tasks.

Ralph Yuhasz is one of the floor leads on the fire alarm system. He’s been with Encore Electric for five years. You can find him working on multiple floors at the same time. Ralph is working with Mark Hamilton on the fire alarm system. Both are training Gavin Evans, a second year apprentice, who is proud to represent Encore on the project. “I like to work with my hands and to learn as much as I can,” he said.

Kevin Gardner is the foreman, working on other areas benefiting from prefabrication for the project. “We are working to get brackets with boxes ready to go for data and power to make our job quicker and easier.”

Whether they are working on wall rough, connecting backlit mirrors in all bathrooms or ensuring life safety systems are installed and operating, Encore Electric craftsmen on the project are excited for the building’s opening and dedication later this year. It’s yet another building lighting up the Denver skyline where Encore Electric craftsmen have had a major hand in its creation, and where prefabrication has become a major component of building success.