Anschutz Health Sciences Building a Marvel of Form and Function

June 20, 2022 – Aurora, Colo. – The Anschutz Health Sciences Building (AHSB) on the University of Colorado Anschutz Medical Campus in Aurora, Colorado is a building that has begun to provide new ways of learning, outpatient healthcare options and office space to the employees of the University of Colorado and the community at large. This 395,000 square foot facility, at seven floors, is an architectural marvel, and the Encore Electric team was happy to provide power, lighting, one-line, and fire alarm solutions for the project.

Featured inside of the building is a large atrium, offices, outpatient and clinical areas, an on-site data center, along with research and training areas that include a wet lab and custom training headwalls for nursing students. The project hopes to unite many different University of Colorado teams under one roof, which will allow for greater coordination and collaboration.

General Contractor JE Dunn worked together with the Encore Electric team to ensure that the power and lighting needs met not only the complex demands of the owner, but also that the building took advantage of the 300-plus days of sunshine Coloradans have come to expect, with its resulting effect on lowering energy demand and usage. They did this with the large centerpiece of the project, the atrium, which works in tandem with the glass façade to ensure natural light finds every nook and cranny of the building.

As was the case with nearly every construction project that was built between 2020 and 2022, dealing with COVID-19 on the jobsite and in the community was one of the largest challenges at AHSB. However, that didn’t stop the Encore Electric team from collaborating with general contractors and partnering with other specialty contractors to help keep the project on schedule.

“The one thing I’m most particularly proud of is the coordination of all the efforts when it came to all the different systems,” said Kevin Kosters, senior project manager at Encore Electric. “The way it was built and came through schedule-wise, the outcome of where we’re at today is incredible.”

As the job came to a close, coordinating all the remaining work with both manpower and material delays became a larger challenge for the team to solve. Specialty contractors and partners all had many items left to complete in a short amount of time, and trade stacking was a very real concern as disparate teams worked in the same areas. Only coordination between trades allowed the job to finish in a timely manner.

“For a complex project, that might be one of the things that’s holding us together here at the end is the folks that we work with,” said Ryan Claussen, general foreman for Encore Electric. “They’re incredibly helpful and they adjust as needed. At this stage of the job, keeping up all the loose ends and pieces that are left, that’s what it takes to get through it.”

Another large challenge was the architecture and layout of the building itself. Many of the floors did not stack directly on top of each other. As they were offset and not squared off, it fell to the Encore Electric team to understand the electrical system completely, and then use problem solving techniques to understand how to not only run power between the floors, but to also ensure that all drawings and virtual design were updated to make sure every trade knew exactly where potentially dangerous electrical runs were made.

“Three years to build seems to be the new norm with complex systems,” said Brian Kleingarn, superintendent at Encore Electric. “Electricians are one of the first to show up to these projects, and one of the last to leave.”

Designing and installing the lighting in the huge, seven-story atrium was a challenge for the Encore Electric team and included using complex solutions to work in tandem with the natural light to create an inviting, welcoming space for occupants. Many buildings feature an atrium, but few feature an atrium of this size and with these architectural features. What is an architect’s dream to design can often be a complicated, complex piece of construction that only the best contractors can build.

“It can’t just be an off-the-road electrical contractor that can do something of this size,” said Jorge Garcia Murillo, foreman. “They need someone who can come in and do it with the finishes that they want and architectural features.”

The building truly functions as a hybrid of a commercial office building mixed with a healthcare facility. This led the Encore Electric team to being their expertise in healthcare settings to the other areas of the build, and there was no such thing as “good enough”. 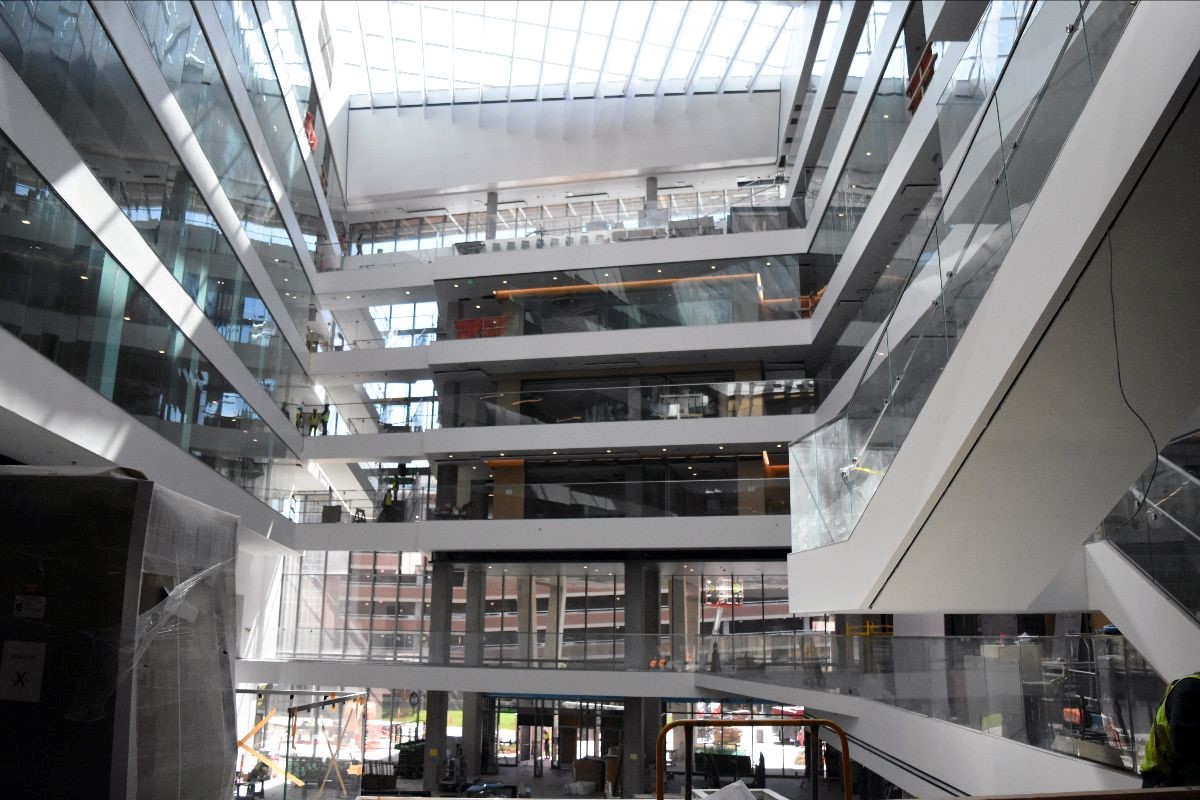 One example are the amazing finishes throughout the project. Atrium trim lighting is an aesthetically pleasing aspect of the project that will wow occupants and visitors. This lighting wraps every floor of the atrium and provides a lovely extra “touch” of detail that won’t be missed by those who enter the facility. This item, along with the grand stairs in the atrium and the video wall, was the last task to be checked off the list, and all of the care put in by the Encore Electric team made a big difference to the owners, and eventually to the end-users.

From the lighting and light requirements in the atrium that work together with natural light, to the power requirements and customizability required in the training rooms, every part of the design served either a functional or aesthetic purpose in the project – and many of the items installed by the Encore Electric team served both.

“It’s a very complex project. I think it’s going to look really cool and when it’s done, everyone will be happy with the final product,” said Ryan Claussen. “I don’t know that the people who are going to be staring at the final product are going to be necessarily aware of what it took to get it there, but the owner and end user will be satisfied with what they see.”