Bringing the Trade to the Next Generation of Electricians

May 4, 2018 – Lakewood, CO — Electricians and other team members from Encore Electric hosted the next generation of electricians – 20 students from Smoky Hill and Cherokee Trail high schools on Thursday, April 26, 2018 at both the fabrication center and on the job site at UCHealth Highlands Ranch Hospital. The kids took part in seeing how electricians work, learned about the trade, and got hands on experience with wiring their own electrical box. 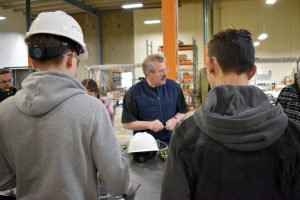 The students who attended were juniors and seniors from the schools who have demonstrated a desire to learn more about the construction industry.

In July of 2017, Dave Scott, director of Human Resources and Training at Encore Electric, was approached by the Associated General Contractors to see if he had any desire in sponsoring a high school to introduce students to the electrical trade. Thirteen schools in total were looking for sponsors.

“I believed so strongly in getting the message of our trade into the high schools, I said I would serve as volunteer coordinator to find Encore sponsors at each of the 13 schools,” Scott said.

Eventually, 11 schools adopted the program, which includes jobsite tours, activities for students, career fairs and tours of the schools. Encore Electric continually connects the electrical trade and our career opportunities to high schools and their students with these programs.

The day started with a tour of the fabrication floor by Rob Mercier, Fabrication Manager, and included a long demonstration by Don Manee, Foreman, who showed the kids how to build their very own electrical box. The students then had an opportunity to put their new skills to the test.

“From there we toured the UCHealth Highlands Ranch Project to give the students a realistic career preview and show them all the cool things we do as a company,” Scott said.

Being on an active construction job site was an eye opening experience for the students, who took the opportunity to ask questions of the electricians on the job, and get a great view of the Front Range from the top of the facility. Encore craftsmen all helped out by giving the tours at the job site and answering the students’ questions.

In the Cherry Creek School system, Encore has found an ally in Dan Draper, who has been instrumental in vetting students, gathering support in the administrative side of the schools. He is a true partner in this continuing relationship. In addition, Encore Electric would also like to thank Kelli Buffo, Mike Wadleigh and Laurie Allyn from the Cherry Creek Schools Career and Technical Education Department, and Bryan Cook and Lisa Seaman with the AGC for their help in opening the doors to the school systems.

There are so many volunteers in both the school system and at Encore who made this great event happen. This was the first full tour of Encore, and the team is hoping to replicate it with other school systems and their Encore sponsors.

Thanks to Rob Mercier, Don Manee, Medhat Nasrallah, and Robert Lynch in Prefab as well as Jeffrey Fischer, Brian Kleingarn, Jonathan Emmons and Charlie Mattie on site. They were assisted by Daniel Volpe, John Danelek and Mike Tyson. Special thanks goes out to Scott Larson, and Mortenson Construction for allowing us on site, Jim Nottingham and the legal team as well as Adam Dillman, Dale Weis and Scott Nelson for making it a reality.

If you are interested in joining the team who is making these tours and events happen by “adopting” a school in 2019, contact David Scott at David.Scott@EncoreElectric.com.