The theater is the first step in the new visionary development along the Blue River that will change Silverthorne’s downtown into a cultural destination location. It touts its “state of the art” lighting and sound systems as well as integrated communications systems.

For the Encore Electric team this was a challenging, yet successful, design build project for both the electrical infrastructure and the special systems, including the theatrical sound system designed by Encore Electric.  The team worked with the company’s technical leads to understand technology priorities, including performance sound and stage management.

“One of the most difficult segments was working with the theater to make the most of a small budget,” said Pete Palmgren, Mountain Business Unit Leader for Encore Electric.  “Like other projects we have done, the challenge drove us to help the client achieve their goals and to create a great theater venue.”

On opening night, Encore Electric Foreman Brian Bannen was recognized by the owner to show appreciation for the work done by the Encore Electric team on the facility.  Encore partnered with Adolfson & Peterson as the general contractor on the project.

In Fort Collins, another entertainment venue is nearing completion in time for the Colorado State University Rams first home football game on August 27, 2017. That’s the day Rams fans will be treated to a brand new stadium with advanced technology throughout the stadium, including the big screen that’s as large as a basketball court at 82’ wide and 50’ high.

Encore Electric electricians put in extra efforts six days a week and around the clock to provide their expertise to the project and meet the challenging deadline for the project, which has been said to be one of the fastest stadium projects ever built at 20 months from start to finish.  The project was led by Mortenson Construction. 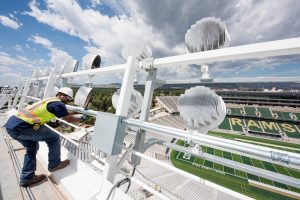 Jason Dowell, one of Encore’s project managers on the project said, “This project was successful because of the efforts and dedication of the entire stadium team.  It is amazing to take part in a project like this with the complexity of the design and the fast-paced schedule.”

Encore Electric Vice President Marlin Linder agreed, “Our electricians were always the last people to walk out the door at the end of the day, and what they did on that project is nothing short of a miracle.”

“This was a huge job on a fast track with a monumental undertaking,” said Willis Wiedel, Encore Electric president.  “There are so many heroes to name, and the project is a great illustration of our company value of Team Ahead of the Individual.  I would like to personally congratulate everyone who worked on the project.”

“What’s exciting is that fans will be watching for years to come,” said Andy Gordon, Encore Electric Northern business unit leader.  “Our electricians were talking about bringing their kids to the stadium to watch the game to experience a stadium that will be different than any stadium in the state.  It is going to change Fort Collins and create future growth for the university, as well.”