Originally built by Judge Ernest Colburn in 1928, the hotel featured two towers, one of which was built to be luxury apartments, and catered to guests looking to get away to Denver for a variety of reasons. Denver at the time was just beginning to come into its own, and some very well-known people may have passed through its doors on their way to and from the mountains or points further east.

The hotel closed in 1988 but reopened later as ‘efficiency’ apartments for low-income residents. It has remained that way ever since. In 2018, the buildings were purchased by Gorman & Company and renovations began. Gorman & Company is an organization that works to revitalize and restore communities through developing groundbreaking housing partnerships all over the United States.

“A few months later, Gorman utilized a variety of funding sources including low income housing tax credits, historic tax credits, and City and State funding sources to not only preserve the existing tenancy, but work on the rehab of the entire building,” said Lauren Schevets, Director of Development for Colorado at Gorman & Company.

For Encore Electric, renovations will consist of complicated updates and additions in each of the units, as well as some of the building’s amenities. In the basement, there will be a brand-new fitness center. Perhaps the largest electrical change, however, is the upgrade of the electrical rooms to bring them up to code and to ensure the safety of everyone who uses the buildings – tenants and commercial occupants.

“This building was in pretty desperate need of an upgrade when we started.  Putting together a plan to get this job done in the short amount of time provided, while preserving the historic value, and leaving the rest of the building operational during construction was a pretty daunting task,” said Lane Morgese, project manager for Encore Electric. “We’ve got a great team on site that was up to the challenge, and they have done a phenomenal job to make this project a success.”

“From an electrical standpoint, the challenge has been camouflaging our new work. We had to change our route three or four times until we finally found a way to bring the electrical up from the basement without running wire and cable through the corridors,” said JR Casias, superintendent for Encore Electric. “There were also some challenges when we were in the units, including being careful to not just cut away some of the historical trim that has been here from when it was first built. We’re working around that and preserving it as much as possible.”

Encore Electric is using a variety of updated techniques to deliver the best possible electrical power and technology to the residents of the Colburn Hotel.

“I really like the electrical dimming and the way they set up the electrical in the apartment now, how the light covers a wider area,” said James, a resident of the Colburn since 2018. “The lighting covers the whole room, which for me is comforting. The energy savings for me as a conservationist I really appreciate too.”

In addition to lighting and power upgrades, the life safety system was updated with a full fire alarm panel with new devices in each unit, allowing the fire department to pinpoint where an issue may occur.

Prefabrication techniques are being used to quicken the pace of the project, as each floor is renovated one by one, and necessitates the temporary displacement of the residents who live there. Prefabricated materials included the electrical panels and ceiling fans. The panels were built so that all field electricians had to do was drop each panel into place in each unit, and then make their connections, allowing the team to finish each unit at an extremely quick pace. 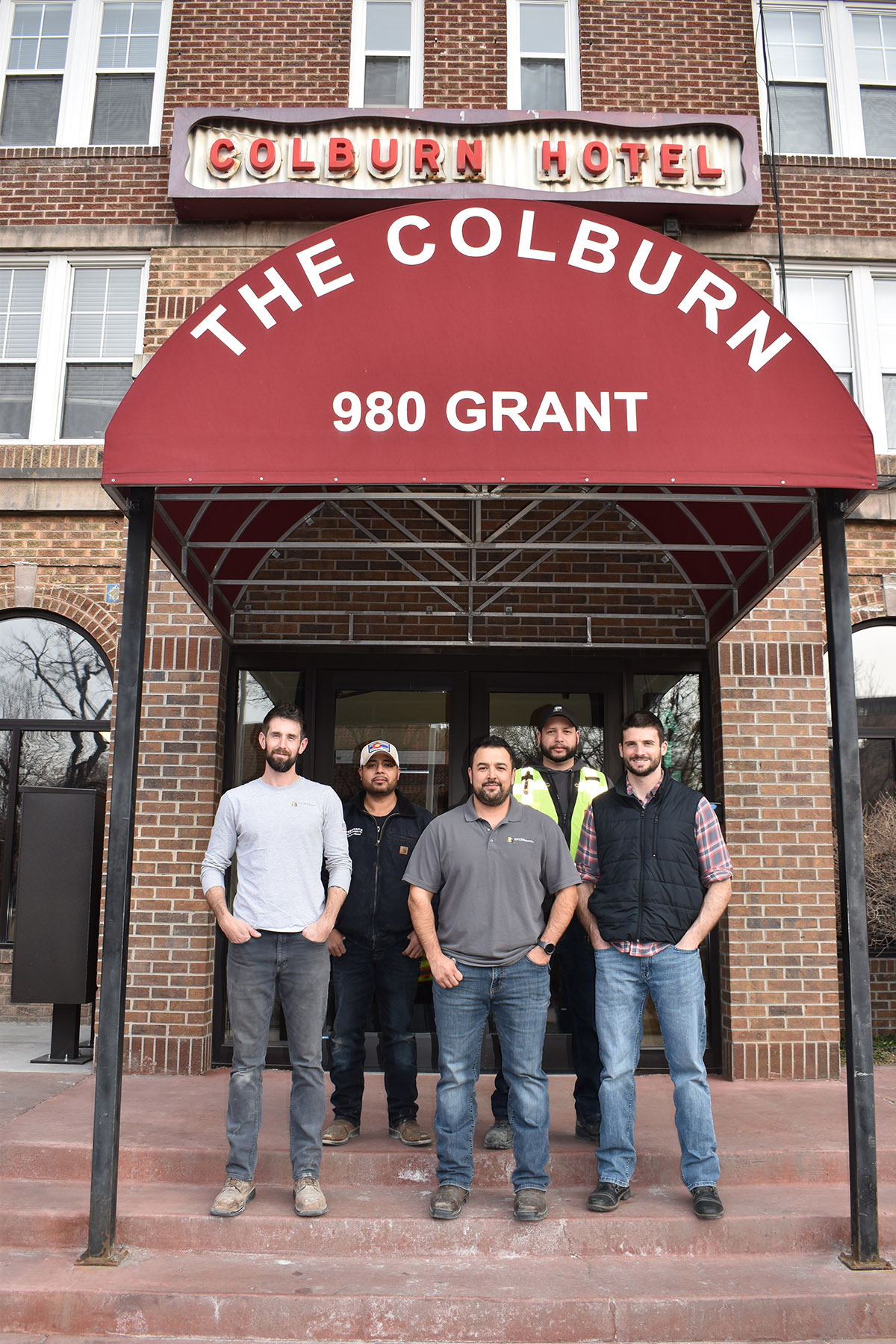 Each floor, from the third to tenth, has 11 apartments.  The team is tackling one floor at a time. The team has only 30 days to complete each floor, so using those prefabrication techniques is vital to ensuring that residents are displaced for the least possible amount of time. All work was also done on the building without taking down the power for the businesses in the bottom floor, including a restaurant and a chiropractor’s office.

In addition, there are increased power requirements for the new electrical equipment and upgrades in each of the units, requiring a new Xcel Transformer on site. Power was previously coming into the building from a utility pole in the alley behind the building, a less-than-ideal situation for reliability and for safety. Not only is there a new transformer now, but each apartment is on its own circuit, allowing minor electrical issues to be confined to a single unit.

“When we first came out here, James and I kind of looked at each other like this is gonna be a fun job. It’s gonna be very challenging. We both put a good plan together, and we executed it,” said Casias.  “It’s pretty humbling to see them moving back in because most of them have a really rough life. For them to get something new, that’s really a humbling experience.”

At the job’s peak, there will be a total of eight Encore electricians working on the site.

The renovation is currently scheduled for completion in October 2020.