Denver Locals Gather for the 9NEWS Parade of Lights

December 23, 2022 – Lakewood, CO — Every year Denver residents gather for the lights, festivities, and joy of the 9NEWS Parade of Lights. The parade has become a staple event to gather to kick off the holiday season for not only local families, but the independent electrical community as well.

The Independent Electrical Contractors Rocky Mountain chapter and chapter members have made it a tradition of their own to join in the parade fun. Chapter members participate by pulling the lit parade floats through the heart of Downtown Denver. 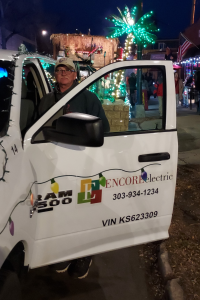 “Encore Electric continued to support IECRM’s community outreach and workforce development mission for the industry by sponsoring one of the twelve company branded, decorated vehicles,” said IECRM CEO Marilyn Stansbury. “It is an exciting honor for IECRM to be able to participate in the electric parade for our fifth year. It is a wonderful way to showcase the industry and was made even more special by having Encore Electric and other electrical contractors engage in the experience with their company branded vehicles bringing exposure to their companies and recognition to the industry! The drivers themselves enjoy the opportunity for their families to ride along onboard, wave to the parade goers, and experience the revelry of the parade from a different viewpoint. Thank you to Encore Electric and all of our truck sponsors!”

“Through our partnership with Independent Electrical Contractors Rocky Mountain Chapter, Encore Electric housed and helped build a float for the Parade of Lights several years ago,” said David Scott, who has partnered with the IECRM for many years and currently serves on the IEC National Board of Directors. “With the supply chain issues and the challenges finding trucks to pull the floats, the organizers of the Parade of Lights looked to the electrical industry to sponsor and pull floats. It has become an amazing industry gathering Encore Electric was proud to be involved in.”

Paal Rundberget, Encore Electric driver and prefabrication support, has been a long-time attendee of the 9NEWS Parade of Lights, bringing his children and growing group of grandchildren along to enjoy the festivities. Over the past several years, Rundberget has increased his involvement in the parade by becoming the Encore Electric parade float driver.

“The Parade of Lights is an event that my family and I have attended for many, many years,” said Rundberget. “A good number of those years were spent standing on the sidewalk, preferably close to a Starbucks, and hoping the kids still had a good view by the time the parade started. Being asked to be a float driver in this event for the past two years has been a true honor, not just being a part of this long-time tradition, but being able to represent our amazing organization, as well.”

Encore Electric is proud to join our industry partner, the IECRM, in lighting the Parade of Lights this year and for many years to come. Happy Holidays!