October 22, 2018 – Denver, CO — Encore Electric continues to be recognized for our contributions on job sites around the region. In October, we were named “Best Overall” contractor at the Mortenson Construction STAR Awards. 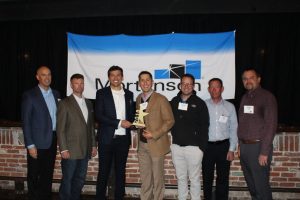 The Mortenson Construction STAR Awards is a ceremony for all the specialty contractors who work on their jobs every year to recognize the work done on some of Mortenson’s largest projects in the region. Encore Electric is honored to accept the recognition of “Best Overall” contractor by Mortenson this year.

“The Gaylord project has been one of the most challenging jobs due to its size and complexity,” said David Derakhshanian, Project Manager at the Gaylord of the Rockies Project. “It is exciting to complete a landmark project of this magnitude with a great partner like Mortenson.”

“It has been a privilege to work with Mortenson on the UCHealth Highlands Ranch Hospital,” said Jeffrey Fischer, Senior Project Manager at Encore Electric. “Encore was challenged to be on Mortenson’s team to build this top-notch facility, and it has been gratifying to watch our team rise to that challenge.”

This acknowledgment of the work we have done on Mortenson job sites this year is a testament to the craftsmen in the field and their dedication to planning, building and partnering with Mortenson.

Many members of the Encore team were on hand to receive the award from our partners at Mortenson.

“We work on projects with Mortenson teams every day and appreciate the partnerships with them,” said Scott Larson, Director of Denver Construction for Encore Electric. “They are doing some of the most challenging projects in Colorado, and we’re honored to receive this award from them. I look forward to the next challenge they can present us with and the ability to give them another one of our A Teams!”