June 9, 2017 Colorado Springs, CO– With Pikes Peak as a backdrop, U.S. Olympic Gold Medalist Benita Fitzgerald Mosley addressed a crowd of nearly 400 people at the United States Olympic Museum ground breaking ceremony. “Iconic and world-class designers and contractors were selected for this world-class project,” said Fitzgerald Mosley, who is a member of the board of the United States Olympic Museum. 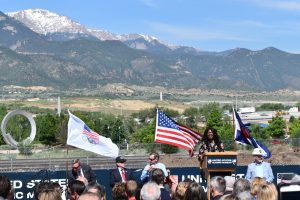 Ambassador and former Ohio Governor and Museum Chairman of the Board Richard Celeste, together with Colorado Governor John Hickenlooper, Colorado Springs Mayor John Suthers and CEO of the United States Olympic Committee Scott Blackmun were among other speakers at the event.

The groundbreaking culminates four years of planning, fundraising and design for the 60,000 square-foot museum dedicated to the Olympic and Paralympic athlete. It will be the only comprehensive Olympic and Paralympic museum in the United States. When complete, it is expected to have annual visitors exceeding 350,000 annually and will create up to 60 permanent jobs in Colorado Springs.

Encore Electric Preconstruction Manager Colby Foos, also a Colorado Springs Native, expressed both a personal and professional interest in the project.  “It’s a huge project for Colorado Springs,” said Foos. “With complex and technologically advanced requirements, it fits right into the Encore hedgehog concept and specialty.  For me, being born and raised here, it means so much to be building part of Colorado Springs history.” 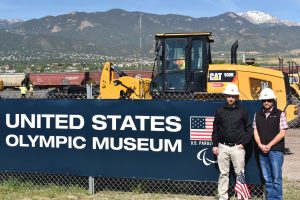 Encore is partnering with GE Johnson on the project that is expected to be complete in the summer of 2019.“We’ve been working on this project for two years. It’s complicated and extremely detailed, with a planned user experience like no other, especially with the technology planned for the exhibits,” said Wade Stencel, director of estimating services for Encore Electric. “It is great to be here today. This is the first of several projects to be developed here in Colorado Springs as part of the City of Champions vision that the city is implementing.”