July 26, 2017 Denver, CO — As part of a celebration with the Saunders-led construction project, Civica in Cherry Creek North last week, Encore Electric team members watched as the last steel beam was set into place on the top of the building.  The ceremony followed construction tradition that some say goes back to eighth-century Scandinavia, where ribbons, flags and sheaves of wheat donned the top steel on a building to symbolize the hard work completed and the hope of future success.(www.slate.com) 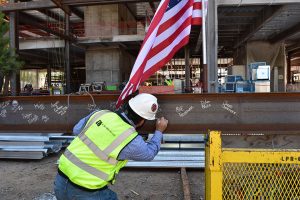 Ralph Smith, Saunders foreman on the project, talked about the challenges so far and complimented the team for their work. “The biggest challenge was the amount of groundwater that the project experienced,” said Smith. “We pumped out 640 gallons of water per minute for seven months, around the clock for a total of 9 million gallons of water.  We were required to dig five stories deep at the elevator.”

Saunders Project Manager at Civica said of working with Encore Electric: “They are always on the ball and they are always thinking ahead.  It has been great.” 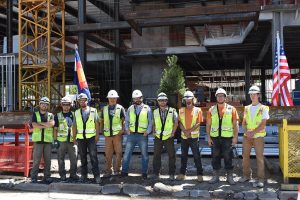 With the pumping of water, the project schedule was pushed; however, contractors are working to make up the gap.  GScott Jones, Encore Electric superintendent commented, “It’s great to be here today at this point at the Topping Out.  Not long ago, there was a lot of water on this site, and we’ve really picked up the schedule.”

“Another challenge is the tight space between other office buildings,” said Aaron Haynes, Encore Electric project engineer.  We had some issues with gear being delivered in the tight spaces.  But with GScott Jones’ leadership, we were able to make it work and grind it out to make up the schedule.”

Stephen Schwengel, Encore Electric project estimator, is really pleased with the project so far.  “It has given me a different perspective to see the building take shape and work on it from start to this point and on to the finish,“ Schwengel said.

“This project has taught me great organizational skills,” said Eddie Sandoval, Encore journeyman. “And for this project, efficiency is the key.  Plus, the Saunders team is holding every trade accountable for delivering the work on time.”

And the Encore team is doing its part to keep the schedule moving.  One team member, Mark Wrench, tracked that he laid 5,280 (one mile!) of pipe in two weeks’ time.

Civica has a planned opening for February 2018 for mixed use in Cherry Creek North.

Topping Out Civica from Encore Electric on Vimeo.