March 12, 2018 – Denver, CO —The entertainment business has legends like Cecil B. DeMille, Dick Clark or Meryl Streep while the sports industry has legends like Michael Jordan, John Elway and Michael Schumacher. But the architecture, construction and engineering industry has legends like John McGovern. As one of his close colleagues recently observed, “when driving around Denver with John, it is easier to keep track of the number of buildings where John hasn’t been involved. His autograph is everywhere.” And the Rocky Mountain Fire Alarm Association agrees. Recently they recognized John for his service to the industry and the association. 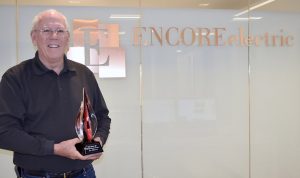 It all started for John with a childhood wish to be an architect. He was on the fast track in math and science programs and he had a love of structures. A college advisor told John that he would fit the engineering field better. John received his undergraduate degree at the University of Colorado in Boulder and upon completing his degree, stayed for a master’s degree in Architecture, Civil Engineering & Lighting.

His career was a series of work at consulting engineers in Colorado and California before he began working for an electrical contractor and a fire alarm specialty company, and through his relationships in the business came to know Encore Electric and the original founders and team members. John is currently Encore Electric’s Technical Resource. His favorite project working for Encore was not working on smoke or fire alarms at all–it was working on the electrical system that ran the fountain in the middle of the lake at City Park. He was proud to bring back a historical monument in Denver, but the most unique part of it was riding a pontoon boat across the pond to the jobsite every day.

During his time at his first electrical contractor in 2000, he began working with the Rocky Mountain Fire Alarm Association. He served the organization as its second president, then as treasurer and then as president again for two terms. During this time, he worked with the association in collaboration with the City of Denver building department and fire departments in the development of city fire codes and building codes to support them.

He worked on the Smoke Control Committee and the Fire Alarm Committee helping to write the Denver fire code for 15 years. Sometimes, when individuals would claim that something wasn’t in the code, John would respond with, “Yes it is. I know it because I wrote it.” As for his reasons for his long-time involvement, John says, “It increased my knowledge, and if I didn’t like the way things were written, I could help change it or have help in rewriting it. Sometimes codes are written without the knowledge of the impact of the codes and the building simply cannot be built. I wanted to change that.” Ultimately, though, John wanted to have an impact on how to save lives, in case of a fire.

Following his term as local president of the Rocky Mountain Fire Alarm Association, he is serving on the national board of AFAA as a board member.