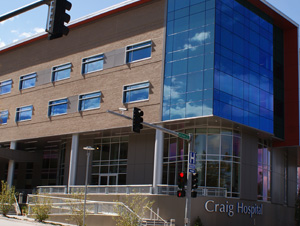 The Craig Hospital Addition & Renovation project consists of significant expansion and renovation to the existing Craig West facility as well as major site improvements. The Craig East facility will have some renovation scope, but this will be limited to a few small areas. The existing family housing wand parking structure facilities are not anticipated to change as part of this project. The new 89,000 sqft. expansion to Craig West consists of a horizontal addition to the north of the existing building and will contain four levels of new occupied structure. A part of the 89,000 sqft. expansion will be roof top, 4th level expansion planned for the majority of the existing Craig West building which will house a new patient floor. A new chiller penthouse, a future boiler penthouse, and a rooftop air handling unit ‘farm’ will also be place on the 5th level roof area as part of the new addition. Major renovation scope is planned for the existing 1st, 2nd, 3rd and a portion of the basement levels. New mechanical and electrical distribution systems will be renovated ‘in place’ while maintaining existing operations throughout the project. Site development consists of a new loading dock near the north addition, a new main hospital drop off area, patient garden and terrain park areas, as well as the closure of Clarkson Avenue to through traffic.