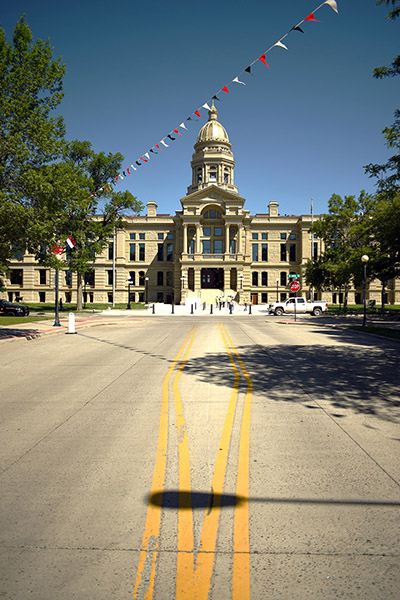 Modernizing any building is a challenge in construction, especially for an electrical construction company. When the building is 129 years old and the symbol of freedom and democracy for a whole state, however, special care needs to be taken to not only renovate, but restore and respect that space, as well.

Encore Electric worked with General Contractor partner JE Dunn and was honored to be a part of the historic renovation of the Wyoming State Capitol as part of the Wyoming Capitol Square Project, reopening to the public on July 10, 2019, after more than six years of construction.

All the electrical systems were upgraded in the Capitol, and new technology was installed, including audio-visual equipment, lighting upgrades and LED retrofits, and a lightning protection system. All of the complicated, complex work was done with an eye toward making sure that this historic symbol was respected in every phase of construction.

“Our trades people had to channel the walls to run the electrical through them,” said Jim Leidholm, project manager for Encore Electric. “You didn’t want to have any Junction boxes, or access holes in the historic building, so trying to find a way to get from point A to point B without any access holes in the area was a challenge.”

“For most of us, this is a once in a lifetime experience,” said Daniel Riepler, superintendent for Encore Electric. “You have to think outside the box on which methods you will apply on a daily basis.”

“The coolest part is when we were demolishing spaces, there were walls that had a random door hidden behind them. (Previously) they just buried it,” said Andrew Cole, assistant project manager for Encore Electric.

Finally, the lightning protection system brings the building into the 21st century, as well.

“Nobody knows the difficulty of routing the lightning in a hundred-plus year old building to try and get it outside, and modernize the building. It’s really cool to see it, and it was really difficult to make the change,” said Cole.

Encore Electric electricians and engineers developed and installed other critical life safe systems like early smoke detection and an advanced fire alarm system to ensure safety of all employees and visitors inside the building in the event of a fire emergency.