April 19, 2018 – Lakewood, CO — The 2018 award season is off to a bang for Encore Electric, following a phenomenal 2017 that saw multiple projects and people from the company win awards. Projects worked on by Encore recently took home three IECRM Summit Awards and an award from the Downtown Denver Partnership. 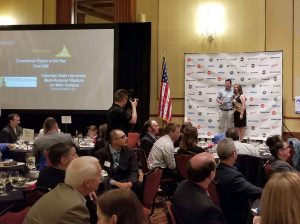 On the evening of April 12, the Independent Electrical Contractors Rocky Mountain (IECRM) held their 12th annual Summit Awards dinner at the Denver Athletic Club. The night was a mix of networking, music and awards. Encore Electric was proud to take home the award for Best Commercial Electrical Project over $3M for the electrical work done on the Colorado State University New Multi-Purpose Stadium on Campus. Accepting the award on Encore’s behalf was Adam Dillman, project estimator. (See picture at right.)

“It’s great to see us continue to be recognized for our work on CSU Stadium. Our guys on the project worked so hard and they deserve every bit of recognition they get,” said Dillman.

“Our experience with performing arts venues and special expertise with these systems was an important asset to the JE Dunn team, bridging the gap with architectural and electrical coordination as well as cost control until it was ready to onboard the specialty subcontractors,” said Kevin Zolitor, Solution Architect and VaPA team member. “Encore conducted the buyout of these disciplines, integrated their capabilities with the construction team and orchestrated the team’s efforts until the first curtain call. None of this would have been possible without the unique combination of experience, expertise, cooperation and commitment of Encore Technology Solutions with the Electrical Construction team, and the outstanding performance of our technical subcontractors.”

In addition to winning these three awards, Encore also contributed to the Sparkling Ice Castle of the Future, the newest float in the 9NEWS Parade of Lights. The leadership on that project was recognized by IECRM as deserving of a special award awarded by IECRM.

Since 1962, the Annual Downtown Denver Awards have celebrated businesses, organizations, events and initiatives that have made significant contributions toward creating a unique, vibrant, and diverse Downtown environment, and have left a lasting, positive impact on Downtown Denver.  On Tuesday, April 17, a Denver Encore Electric project was selected as one of five projects making an impact this year.

According to the Downtown Denver Partnership, Block A was built in the dynamic new urban center, and energizes the commercial core by enhancing the pedestrian experience and bolstering the economy. Capturing the essence of Denver, Block A provides a rich experience to residents and visitors alike by welcoming visitors to the public city center. You can watch a video produced about the project by DDP here: https://www.youtube.com/watch?v=8vymO2bISA4.

Stan Gittens, project manager for Encore Electric, said “Working on Block A was a rewarding experience. The guys on the job really came together to make this building shine for not only the owners, but everyone who uses Union Station and the surrounding area, and we couldn’t be more proud of it.” The project completed in July 2017 and was led by General Contractor GE Johnson.