October 15, 2021 – Denver, Colo. – The Independent Electrical Contractors (IEC) National Convention was held in Denver last week, and Encore Electric took home two IEC National Awards as part of the festivities. Encore was honored for the work the team did on the US Olympic and Paralympic Museum in Colorado Springs in the category of Electrical, $2M-$5M and for the Vail Health East Wing project in the category of Electrical, over $7M. Project teams and executives from Encore Electric attended the ceremony and received the awards.

This is not the first award one by these projects, as they both previously won IEC Rocky Mountain Summit Awards. The projects’ success at that competition allowed them to be judged among all projects in the nation for these honors.

With Pikes Peak — one of Colorado’s most iconic mountain peaks — as a backdrop, the world’s newest and soon to be most iconic museums, the US Olympic and Paralympic Museum is truly a sight to behold. The museum, standing tall in the middle of downtown Colorado Springs, Colorado, is the culmination of five years of planning, fundraising and design. At 60,000 square feet, it is the only comprehensive Olympic and Paralympic Museum in the United States.

In December 2020, Vail Health opened what it calls “Eagle County’s Hospital of the Future.” While the expanded facility incorporates more of what Vail Health is known for—Olympic-quality orthopedics and sports medicine, research, cancer care and cardiology, the new facility also expanded the number of radiology, imaging, and operating rooms. Five levels of underground parking provide 400 new spaces for patients and visitors. Perhaps the most impressive component of the new hospital is its focus on emergency care.

Congratulations to the project teams who worked on these jobs, and thank you to the IEC National Awards for the recognition. 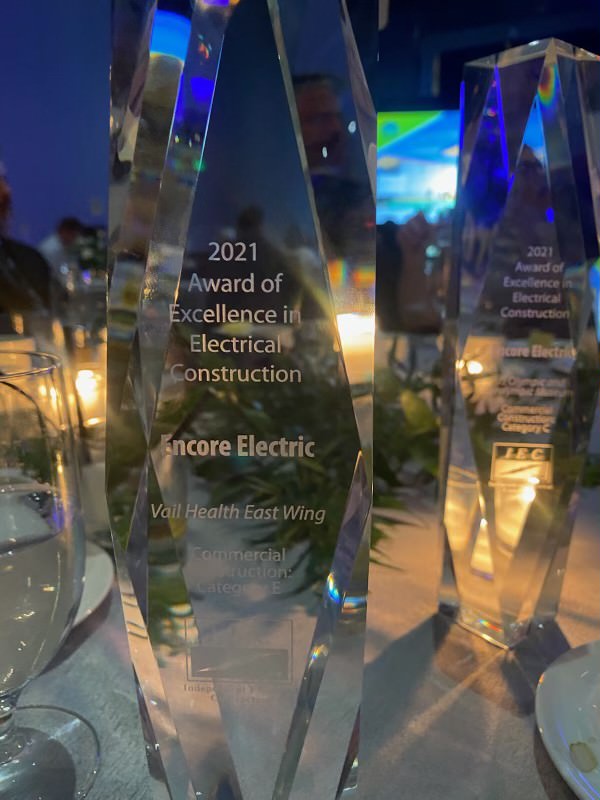